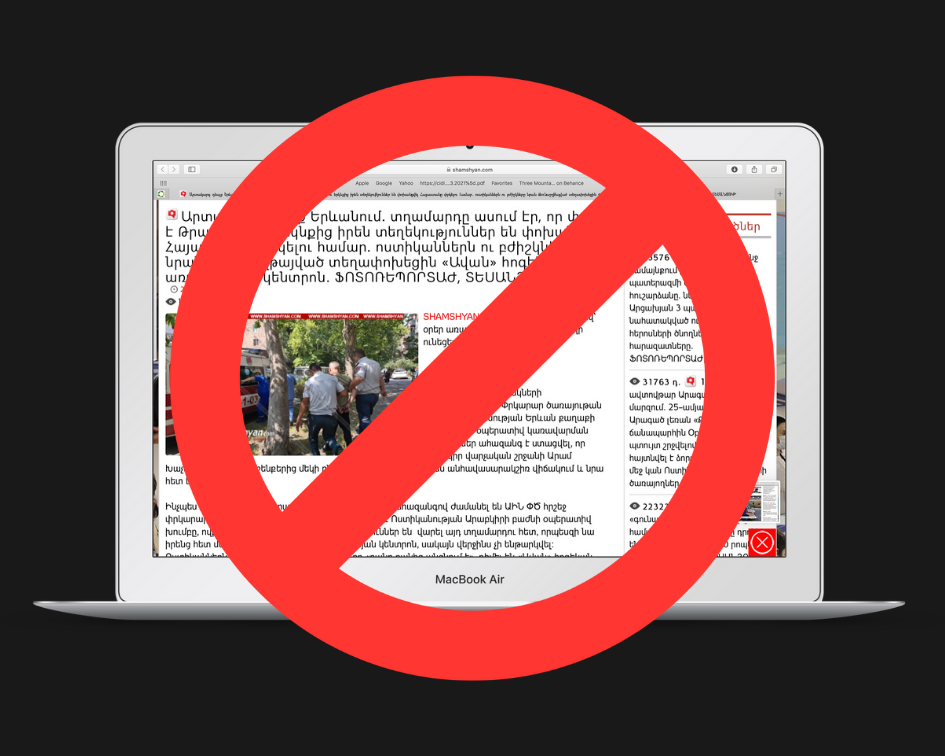 A few days ago, the "Agenda for the Rights of Persons with Disabilities" NGO applied to the Media Ethics Observatory. In the application, the organization asked to examine the compliance of shamshyan.com's article entitled "Emergency in Yerevan. The man said that he had saved Trump, and he had received information from heaven to save Armenia. The police and doctors handcuffed him and took him to the Avan Mental Health Center" with the code of ethics. The link to the article is not posted because it violates human rights principles.

The article was about a man with a mental health condition (assumption) being forcibly hospitalized by the police and the staff of the Ministry of Emergency Situation, using physical restraint. The Media Ethics Observatory considered that such coverage of the event was not necessary from the point of view of protection of public interests.

The Media Ethics Observatory noted that the notice at the end of the text of the article ("A person suspected or accused of an alleged crime is presumed innocent until proven guilty by a court judgment") suggests that the author of the publication identifies a person with alleged health conditions with a criminal, which is unacceptable. "If a person has an illness or mental health conditions, even presumably he can not be considered a criminal," the expert opinion says.

In the photos attached to the article, the face of the person being subjected to compulsory hospitalization is visible, with which it is possible to identify him. "This is unacceptable from the point of view of the protection of a person's data," the Media Ethics Observatory stressed.

"It is especially unacceptable that the website broadcasts the words of the doctor (within 6:43 - 6:55), which claims that the person has mental health conditions, has just been "released" from the mental health center. From an ethical point of view, as well as the need to maintain privacy and medical confidentiality, the editors should refrain from making such an assertion. ”

The Media Ethics Observatory called on:

The Media Ethics Observatory also applied to various state bodies, expressing concerns on many issues. In particular, the monitoring body considered it worrying that "information about emergencies is first of all transferred to shamshyan.com website, besides, photos and videos are also provided." This self-regulatory body stressed that if it is not a policy, but is implemented on the initiative of lower-level employees, then the issue should be regulated. "We believe that informing a website about such and other cases, which does not know the basic norms of journalistic ethics, is always fraught with the risk of interfering in people's private and family lives, covering up possible disproportionate actions of law enforcement agencies."

The Media Ethics Observatory also appealed to health care providers and their employees to "take into account the medical confidentiality and the legal requirements for publishing personal information before providing health information."

Expert Opinion in AM  Annex in AM

P.S. Taking into account that the publication substantially violated the right to medical confidentiality of the person, the "Disability Rights Agenda" non-governmental organization requested information from the RA Prosecutor General to find out whether the publication was examined by the Prosecutor's Office or not. The organization received the answer to the inquiry, but not all the questions were answered (for example, the question about the disclosure of medical data by the medical staff was not addressed). The prosecutor's office had not examined the publication before the inquiry. The request for information (probably considered as an application) was sent to the RA Police with an offer to conduct an official investigation. The postscript will be updated as soon as we receive information about the process.